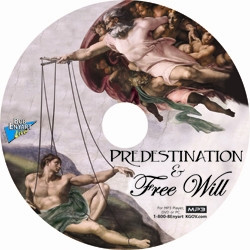 Ultimately, open theism is not based on man's freedom but on God's freedom. Open theism is the Christian doctrine that the future is not settled but open because God is alive, eternally free, and inexhaustibly creative. Although this undeniable truth is virtual heresy to many Calvinist and Arminian theologians, regardless, open theists affirm the obvious, that God is able to think new thoughts. And He can write new songs. And if He so desires He could design new butterflies too.

Broadcast: The Guy Who Put Two Words Together interviews with Dr. Richard Rice who coined the term open theism and co-authored The Openness of God with Pinnock, Hasker, Basinger, and Sanders.

The Will Duffy / Matt Slick Open Theism Debate: focused on God’s free will, the changes the Incarnation brought about within God, and the list of 33 categories of Bible verses affirming that the future is open...

The Bob Enyart / James White Debate: We can trust God with free will.

See our Enyart/White debate page for:
- transcripts of Bob's opening statement and the Isaiah "deity test" rebuttal
- the Attributes Highlighting methodology
- the 15 Scriptures on God the Son's humanity
- the shocking debate aftermath in which White and R.C. Sproul, Jr. commit heresy (that is, even by Calvinist standards) by effectively denying the Incarnation itself as they repeatedly argue that God the Son never took upon Himself a human nature.

* More Resources Here:
- Opentheism.com/debates lists many more such events
- You can comment in our open theism forum at TheologyOnline.com
- Our highly Google-ranked article Is God Outside of Time?
- Check out the 33 categories of scriptures at opentheism.org/verses.